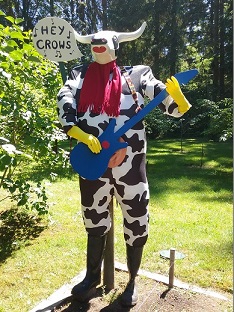 Ray Serebrin began working at KRAB-FM in Seattle in 1969 and was involved in community radio on and off until joining KPTZ in 2012. Ray’s program, the Midlife Crisis Dance Party, is a mixture of music, vaguely annoying comments, and hallucinatory features. Ray worked in libraries for 40 years, starting as a janitor and finishing as the director of the Jefferson County Library District in Port Hadlock. (Both the janitor and the director jobs allowed him to indulge his fetish for wearing yellow rubber gloves.) He also booked and managed rock & roll and rhythm & blues bands and monitored and regulated a band of unruly semi-rogue chickens (two of whom he had to kill). He has won numerous awards based on his extensive knowledge of how to apply for awards. In 1992 he was awarded “The Lorenzo” in honor of his radio contributions to the Jack Straw Foundation as a Producer/Announcer. His name was misspelled on the award.